Already crushing tax rates keep going up in Greece as a major condition of their bailout deal with the European Central Bank.

In fact, as a condition of their bailout agreement with the ECB, sales tax in Greece just rose to a whopping 24%.

As if this isn’t bad enough for Greek business, internet-based companies like Netflix , and Airbnb, and Uber make the situation even worse by creating unfair foreign-based competition that can avoid many of the Greek taxes.

Subscribers to pay-tv (aka cable tv) in Greece now pay about 69 euros / month for programming after the latest taxes are added.

Greek citizens can drop cable tv and switch to Netflix for only about 12 euros / month for their premium package.

At a time when Greek businesses including television are desperate for growth, how can you compete? It might make Greek citizens even more angry to know that Netflix CEO, Reed Hastings, made about $15 million in 2015.

Greek tourists who stay in a hotel are looking at over 150 euros a night to stay in a nice hotel in Athens.

Or, tourists can book an even nicer room at a private residence in Greece for under 100 euros a night. If you’re going to dine out or drink a couple of beers, keep in mind there is an additional consumption tax of up to 20% on food & drink!

Airbnb is no small player in the hotel space either, recently eclipsing a $25 billion valuation; that’s more than international chains like Hilton and Marriott!

Tourism accounts for about 20% of Greece’s struggling economy, and foreign competition from internet-based businesses like Airbnb are making it even harder to compete.

It’s harder to be a taxi driver in Greece these days too. Besides the tax increase, much of their business has now gone to the app-based taxi service Uber. Anger from local taxi drivers has boiled over lately, as Greek Uber drivers have reported getting death threats recently.

Uber is much more than just a thorn in the side of the Greek economy, as Uber recently reached a valuation of more than 5x that of all Greek banks combined! 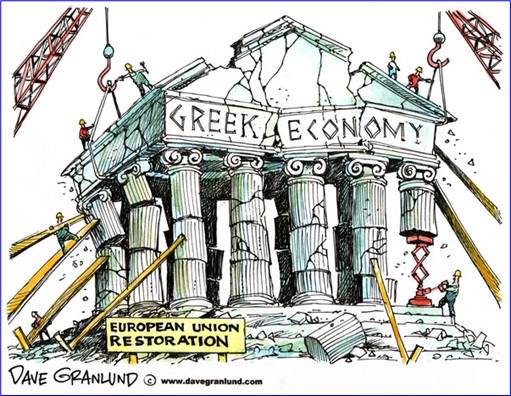 It’s well known that Greeks have largely avoided paying taxes in the past. It’s one of the main factors that led to their current economic crisis in the first place.

Internet-based foreign businesses like Netflix and Airbnb have only made it harder on already stressed Greek businesses by taking money out of the Greek economy.

To add insult to injury, many of these foreign corporations end up parking their cash off-shore, denying any government the ability to tax their income properly.

This brings up the ongoing economic and ethical debate of what the true cost of these internet-based companies are to governments.